‘The drugs are so bland these days’ – Keith Richards talks sobriety, and how the Rolling Stones won’t quit until somebody ‘keels over’

Their peers are announcing farewell tours, but the Rolling Stones have no plans to stop, Keith Richards tells Neil McCormick

On a roll: Keith Richards Is still hungry to make music

Keith Richards hasn’t had a drink since Christmas. The legendary hard-living rock ‘n’ roll icon sounds almost reluctant to admit to sobriety. “I’m not saying I’m definitely off all of this stuff,” he protests. “In six months’ time, I might be on it again. But at the moment, for a couple of months, I haven’t touched it.” When I ask how he is finding abstinence, he chuckles ruefully. “It’s novel.”

The 74-year-old Rolling Stone still smokes incessantly and speaks as if his vocal cords are coated in thick layers of fur, but he insists that cigarettes and coffee are the only real vices he has left. He is impressively disdainful of the prescription drugs rife among a younger generation, such as Xanax and Percocet. “Drugs are not interesting these days. They are very institutionalized and bland. And anyway, I’ve done ’em all.”

His laughter is rich, throaty and infectious, constantly bubbling up to shade his remarks with mischief. Richards has always been the Stones’ most entertaining conversationalist, brutally honest and quick-witted. On the recent spate of retirements of many of his musical contemporaries, he chortles: “More room for us!” On Elton John’s announcement of a three-year farewell tour, he chuckles: “After three years on the road with Elton, you would want to retire too. I’ll take his word for it.”

Richards had a long feud with Elton (who once described him as “an asshole” who looks like “a monkey with arthritis”). However, he is in a forgiving mood. “He’s a lovable old dear,” he says of him now. “He’s softening with age.” But on the question of whether he’ll miss Elton when he’s gone, he is unmoved. “Not at all.”

Asked what it would take to bring the Rolling Stones’ long run to an end, Richards is unequivocal: “Somebody keeling over.” Drummer Charlie Watts has claimed that it wouldn’t bother him if the Stones called it a day. But Richards insists there is no thought of retirement. “There’s never ever been a word about it muttered among ourselves. I guess the day’s obviously going to come, some day. 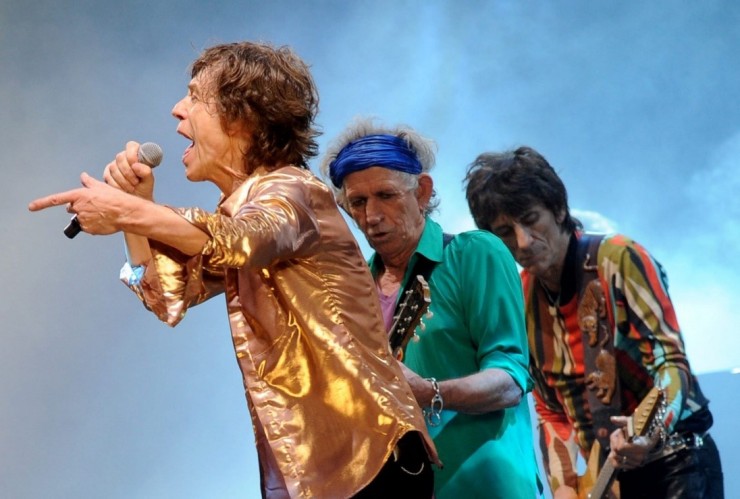 “But not in the near future. We’re all looking forward to doing what we’re doing, especially back in Blighty.” What he’s referring to is the Stones’ upcoming stadium tour of Ireland and Britain in the summer, their first UK shows since Glastonbury in 2013, and their first tour in more than 10 years.

“We’re playing home turf, so there’s a certain extra glow. But it’s always a pleasure to get up there again, especially with this band, man. I think the boys are playing better than ever.

Maybe it’s experience, we seem to be able to pace ourselves right. I’m blessed to work with some of the best players ever. That never gets old.”

There is a new Stones album in the works to follow their fantastic 2016 covers album, Blue & Lonesome. Richards is calling from a studio in New York, where he is awaiting the arrival of Mick Jagger to work on new songs. “Mick’s great, we’re getting on very well,” says Richards. “He’ll be here in half an hour and we’ll be sitting face to face, making music, like always.”

Jagger and Richards met as schoolboys in 50s Dartford and have been the creative leaders and songwriting heart of the Stones since 1962. They haven’t always got along, though, and there was a particularly unpleasant schism following the publication of Richards’ acclaimed autobiography Life in 2010, with its disparaging remarks about Jagger. For a while, it seemed touch and go whether the Stones would ever play together again. But the acclaim afforded their shows since getting back on the road in 2012 seems to have helped thaw relationships.

“Mick and I live off the fire between us,” says Richards, who is effusively warm about all of his band mates. “We were made for each other. It’s like putting on an old glove, man, you know.”

They don’t hang out much between engagements. “We can stay away from each other, happily, for months. But it’s the gaps in between that make it more interesting. You come back fresher. When we do get together, we rehearse very hard, we soak ourselves in it.”

When I ask if the relative sobriety of Richards and fellow guitarist Ronnie Wood has contributed to sharpened playing, Richards guffaws. “Well… all things are relative! Insobriety produced some amazing stuff too!”

That, of course, was also a period when Richards was becoming increasingly addicted to hard drugs, gaining a reputation as the most elegantly wasted human being on earth. The Stones in the 70s ruled the roost during rock’s most notorious period of conspicuous debauchery. In the wake of the #MeToo movement shining a harsh light on the treatment of women in the entertainment industry, I wonder if Richards has any qualms about past behaviour. “You’d have to ask the ladies,” says Richards. “I’ve had no complaints.”

In fact, Richards has always been a bit of a one-woman man. He was with model and actress Anita Pallenberg for over 10 years (they have a son and daughter) and has been married to former model Patti Hansen for 34 years (they have two daughters). Pallenberg, one of the great loves of his life, died last year. “Miss her dearly,” he says, momentarily somber, before suddenly laughing again. “Long may she not rest in peace, because she hates peace!”

With so many deaths and retirements among his contemporaries, it seems the rock ‘n’ roll era is coming to an end. Young guitar bands find it hard to thrive in the charts. Gibson guitar manufacturers were recently revealed to be on the verge of bankruptcy.

Richards remains optimistic, though. “I don’t think eras end, they sort of fold and meld into each other. If rock ‘n’ roll is at an end, when was the beginning? It’s part of the blues, it’s built into the musical framework of the world. If we’re talking about fashion and all the other things, everything was rock for a while – you can’t expect that to go on forever. But we’ll see. We’re going to be playing to several million people in the coming months, so I wouldn’t call that dead.”

Richards doesn’t particularly keep up with new music (“Even as a kid, I never listened to what was pop, was always listening to old stuff”) but admires Lady Gaga, comparing her to Barbra Streisand, and Ed Sheeran, of whom he says: “Nice voice, nice songs.”

Richards famously reads a lot of history books and listens to the blues, jazz and classical music. Does he keep up with politics and current affairs? “Well, it’s very difficult not to these days. They’ve got a president here that’s pretty funny. And I don’t mean ha ha.” Trump used a Rolling Stones song, ‘You Can’t Always Get What You Want’, on his campaign trail, continuing to walk out to it even after the Stones asked him to desist. “That’s about the level of the guy’s manners,” notes Richards, disparagingly.

Despite all indications to the contrary, Richards and the Stones won’t go on forever. But he’s clearly determined to enjoy it while it lasts. “I do think the further along the line you go, and you realize you are enjoying it, you put more into it. Just the fact that we’re still honing it down, it’s a blast.”

He expects to keep playing until he drops and insists he doesn’t worry about when that day might come. “I never think about it. Never. I know loads of other people worry about it, and I let them concern themselves with it. Me, I’ll wait for it to happen.”